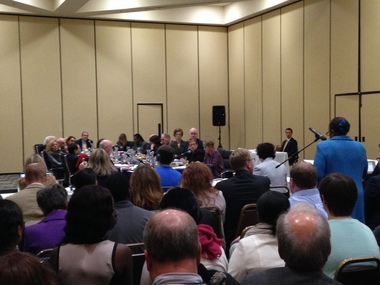 NAACP Flint President Frances Gilcreast addresses the University of Michigan board of regents Thursday, Oct. 16. Gilcreast is unhappy because she believes the UM-Flint campus has not done enough to reach out to the African American community in the city of Flint. Amanda Emery | MLive.com

FLINT, MI – The University of Michigan Board of Regents held their monthly meeting Thursday, Oct. 16, in Flint and were met by some in the community who are unhappy with the university’s outreach to people of color.

The regular monthly meeting was held at the Riverfront Banquet Center in downtown Flint. During the public comment portion of the meeting several members of the Flint community, including NAACP President Frances Gilcreast, discussing the decline in enrollment of African American students at the University of Michigan-Flint and the university’s role in community outreach.

Gilcreast said the Flint chapter of the NAACP had done research that showed the number of African American students enrolled at the UM-Flint was far lower than she would have anticipated.

Gilcreast went on to say during the public comment portion of the meeting that only 9 percent pf the university’s faculty are African American and only 13 percent of the staff are people of color.

“As we continue to delve into this situation we found that the university’s treatment of our community, we discovered that many of the programs that were put in place to empower…were being marginalized, they were not funded properly – the marketing wasn’t there and the general university support was non-existent.” Gilcreast said. “I speak of the Africana studies program, the Office of Educational Opportunity Initiatives, and the Office of Diversity Education.”

UM-Flint alumnus Charles H. Winfrey addressed the board of regents and spoke of his time as a student in the 1970s. He said at that time the chancellor was William Moran, who made the African American student enrollment percentage of 16 percent in an archived report Winfrey had come across.

Winfrey said he represents a group of citizens who are concerned about this neglect and non-responsiveness and they implored the board of regents to take action. He said he believes the university has shown a lack of commitment to African American programs.

Flint resident Paul Jordan addressed the residents about the recent departure of Tendaji Ganges, director of Educational Opportunity Initiatives, who was put on administrative leave shortly before his employment at the university ended on Oct. 1.

Jordan said the dismissal of Ganges was significant to the university because of the role his office played in community outreach.

“Mr. Ganges and his office were one of the most visible efforts of the university to extend itself beyond its campus and beyond engaging with the powers that be in Flint to engage with the people of Flint.” Jordan said. “His termination adds credibility to the image of the University of Michigan-Flint as an outpost, but not really part of Flint. Part of downtown, but not really engaged with the people who live in the areas that surround downtown. That’s a problem.”

As president of the NAACP Flint, Gilcreast offered to help the university moving forward with community outreach especially in keeping young people in the area and helping increase the graduation rate.

“We have so many economic challenges.” Gilcreast said. “We’re losing our young people from outside sources to other places. We need to keep our resources here. If we’re gonna have a great Flint, we need to make sure we maximize our resources and our resources are our people.”

UM-Flint Chancellor Susan Borrego listened to the community’s concerns and said since the eight weeks she has been on the job she has been meeting with groups to identify issues.

“Well, I’ve been here eight weeks now. I haven’t been able to really look at the extent of the data, but I will tell you between 2011 and 2012 for incoming first time freshmen we’ve gone from 9.2 percent African American in ’11 to 22.5 percent African American in 2014. Having said that, there is an absolute need for us to continue to work with Flint schools to both bring Flint students in and support them to graduation.” Borrego said. “It’s not a problem that started six weeks ago, so it’s going to take some time to address it.”

We are working to provide all people with access to the means for good health. Help poor people overcome emergencies.